On Monday, May 17, 1920, an enthusiastic group organized a chamber of commerce, adopted a logo: "Bigger Better Bastrop," encouraged the city council to fix downtown parking issues, and held their first annual banquet.

On January 14, 1922, the Secretary of State signed its articles of incorporation, but before long the chamber lapsed into inactivity, revived for two years, then remained inactive for a decade.

In February 1939, business-minded citizens again re-activate the chamber, this time permanently. Members hired a secretary and operated in a rented building on Main Street.

Boom-time commercial prosperity ended in 1947, when Camp Swift closed, and an economic recession began. The chamber worked to attract industry and hoped to boost the economy with an annual Homecoming celebrations.

Throughout the 1950s, its record was mostly mediocre. For five years in the 1960s, it designated the "Most Worthy Citizen" at the annual banquet. As always, it supported school bond issues and advocated for a modern hospital and other improvements.

Then, for twenty years, the chamber evolved into a mostly community-support-and-information organization.

In the 1970s, new life came with an infusion of young leaders. It focused more on tourism and economic development, moved to the old county jail (rent free), and elected its first female leader.

The burst of enthusiasm carried into the 1980s. A new hotel tax provided funds to enhance its tourism efforts. It resumed an awards program, offered educational classes, began ribbon-cuttings and groundbreakings, and faced the challenges of population growth and two business strips - one downtown and one along highway 71.

In 1985, the chamber played a crucial role in successfully preventing the City of Austin from annexing a large part of western Bastrop County.

In 1989, it contracted with the council to serve as the city's economic development agency.

After a significant financial lost in 1989 on the annual Bastrop Homecoming, the chamber handed off the event for others to run and experimented with new tourism events - Loblolly Days, Old Iron Bridge Festival, and finally settled on a Patriotic Festival.

In the early 1990s, the board tried to fix perennial internal problems, and concentrated more on its mission.

After having purchased a building along Highway 71, it returned downtown to its present location in 1993.

When the city created a tax-supported Economic Development Corporation, the chamber reverted to a role of supportive advocacy.

In 1996, the board hired Laura McQueary Terhune as president and CEO, and worked to downgrade its ceremonial and cultural functions in place of a more solely business orientation. A gradual process along these lines continued over the next quarter century.

The organization launched a monthly newsletter in the newspaper and helped muster essential support for the development of a Hyatt Resort ten miles west of town.

McQueary-Terhune saw the chamber as the "Voice of Business" and an "integral part of practically every issue of importance to the community."

In 2002, Susan Wendel replaced her and built on the positive momentum, promoting the cause of business at every opportunity.

Two new organizations - the Downtown Business Alliance and Oldtown Visitor's Center - allowed the staff of the chamber to concentrate more on needs of the members.

In 2014, Becki Womble took the helm over the now 600-member organization when Wendel retired, and she continued to help the chamber improve, narrow its focus toward members, and adjust to "an ever-changing environment for the business community" in a rapidly growing area.

A competent, well-rounded board enabled the movement toward "all business - all the time." For example, the board transferred its decades-long tourism work to a new tax-funded entity, Visit Bastrop. Now it could truly function as "the Voice of the Business Community" through an unimpaired advocacy role to advance its mission.

The 2020 the chamber members and leadership faced the COVID-19 pandemic. Membership declined, meetings took place over the internet, virtual luncheons had to do, and the board reluctantly canceled its iconic Patriotic Festival and held a substitute banquet event outdoors.

As it had throughout its history, the chamber found a way, and in 2021 the Austin Business Journal distinguished it as the third oldest and fifth largest chamber in Central Texas. By year's end, the chamber had a membership of 750, with businesses representing 9,500 jobs.

Everyone involved looked forward to a new century, of service as the unified "Voice of Business in Bastrop County," articulating its vision, and demonstrating through action, its readiness to transform the area's economic environment in ways that would have seemed impossible to those who signed papers of incorporation in 1922. 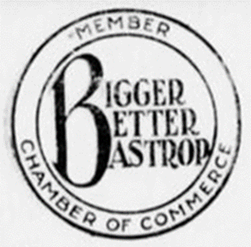